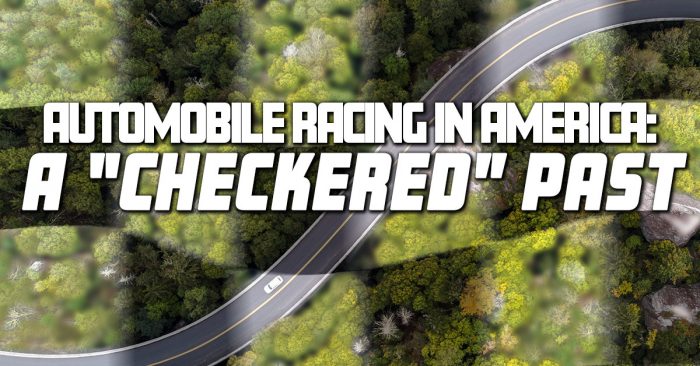 The first recognized automobile race in the world was an 1895 event with a course that went from Paris to Bordeaux, France and back. The race was won with an average speed of just over 24 mph. In comparison, riders in cycling’s Tour de France complete the course with average speeds of over 40 mph.

In the United States, auto racing history began with a race from Chicago to Evanston, Illinois and back on Thanksgiving Day of 1895. An early snow kept average speeds to just over 7 mph.

Many early auto racing tracks also served as horse racing facilities in the 19th century. The first closed-course auto racing event took place in 1896 at the Narragansett Trotting Park; located in Cranston, Rhode Island. Auto racing also began at another horse track, the Milwaukee Mile in 1903 and continues to this day. Knoxville Raceway in Knoxville, Iowa,is the oldest racing venue, and one of the most prestigious, in the United States. It was built in the late 1800s at the Marion County Fairgrounds in Iowa. Like the Milwaukee Mile, it too was initially built as a horse racing track.

One of the longest-serving and legendary multi-purpose racecourse in the United States is the 2.5 mile track at Indianapolis Motor Speedway. Constructed over 6 months in mid-1909, when it was completed, it was the largest capacity sports venue in the world. The original surface was bricks, providing the nickname “The Brickyard”. Today a strip of original bricks remains at the start-finish line.

A uniquely American style of racing, stock car racing rapidly gained in popularity with the formation of The National Association for Stock Car Racing in 1948. NASCAR began racing modified cars from the factory on the beaches of Daytona, and rapidly expanded in the 1950s to tracks across the Southeast. The massive Daytona International Speedway, home of the Daytona 500 NASCAR race was built in 1958. Like Indianapolis Motor Speedway, the racetrack is 2.5 miles long.

Of course, automobile racing is dangerous by nature. In NASCAR alone, 28 drivers have been killed while racing, the last of which was Dale Earnhardt in 2001. At the Indianapolis Motor Speedway, 73 people have lost their lives, 42 of which were drivers. The others included a motorcyclist, ride-along mechanics, pit crew and even track personnel and spectators.

If you are interested in comparing car insurance rates, one of our independent insurance agents can help. Simply contact us, answer a few questions, and you could potentially get a money-saving quote.

Can Business Insurance Keep Your Company From Being Sued?

The Power of Looking Forward

The Fastest Car You May Never Have Heard Of

Duct Tape: The All-Purpose, Don’t Leave Home Without it Product.

Fuel Your Business with a Blog

The Little Known Story of the First Japanese Super Car